ALL WITHIN THE CIRCLE OF WILLIS: Prologue 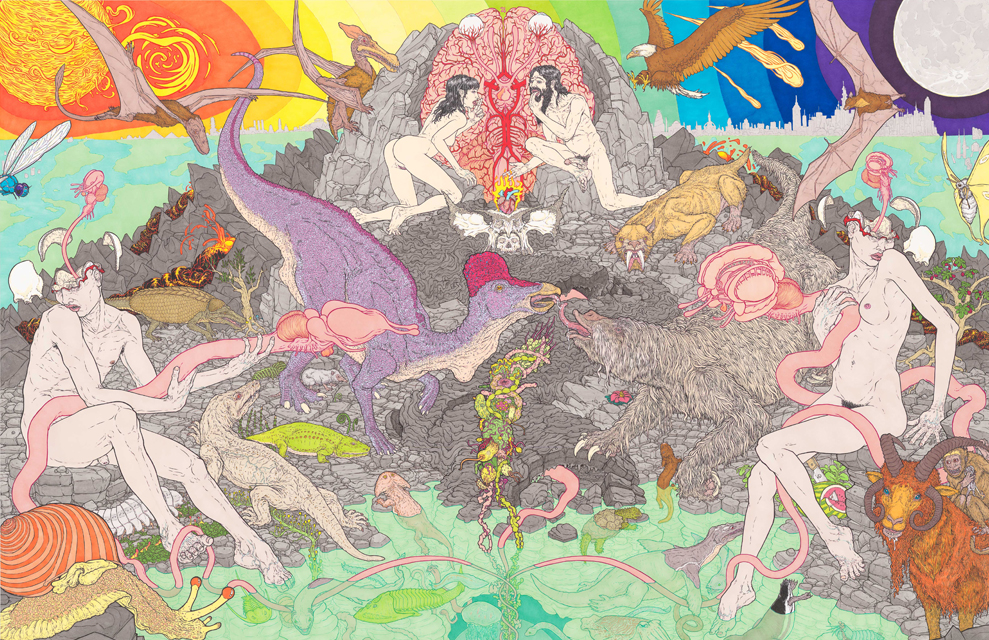 The Circle of Willis is an antiquated name for the arterial circle at the base of the brain that receives and distributes all the blood that is pumped up the two internal carotid arteries traveling into the brain. This crucial artery supplies the brain and all its functions with fuel, elegantly wrapped around the pituitary gland, the Circle of Willis serves as a gateway between the mind, body and the environment. All within the Circle of Willis refers to the notion that all the world and all the universe is both contained within the human mind and the mind as a part of the whole is contained within the infinite universe.

The origin of life on Earth has been the focus of both religion and science for as long as they have existed and is essential to the foundation of any world view. A world view however is subjective; and like religion and science, like our understanding of ourselves and our perception of the world, is flawed and mutable.

The 21st century western world view of the evolution of life on Earth is founded on concepts born of the industrial revolution and distorted by a post war materialist fantasy. This perspective has been formed by new myths, the myths of science. One of the great myths of science is gradual progress through competition, Natural Selection, the idea that individual organisms struggle against one another competing for the prize of survival. This 21st century creation myth is being reformed in the face of a centuries old foundation, now crumbling, unable to withstand the weight of so many new anomalous functions of the living earth.

The notion of a beginning stems from the Old Testament concept of creation and the development of a lineage. Western science came directly out of the Christian church and was still using their creation myth until very recently. This basic starting point neglects the now obvious circumstance that all organisms live, reproduce and die in symbiosis with each other and their environment, exchanging resources as a growing cooperative whole with no individual separation and no need for the metaphor of competition. Today western science institutions proclaim the uselessness of religion while maintaining a structurally identical metaphor for their story of evolution, that everything was created from nothing and developed through the imperial laws of nature, one step at a time slowly growing ever closer to the present incarnation of us, the Immaculate Homo.

In the process of evolution viruses act as a catalyst transferring information between organisms from the six kingdoms of life: Archaea, Bacteria, Protista, Plantae, Fungi, and Animalia. Viruses are information itself, the seventh kingdom of life. It was through the free hands of the first ancient bipedal apes that this seventh kingdom of life allowed an external manifestation of information, tools, technology. It was these created objects that gave birth to humanity by shaping the behavior of our ancestors and fuelling the expansion of an object-centric consciousness.

We have not made our world. Man does not have dominion over nature; rather the flow of information, viruses and the symbiotic interaction of all the kingdoms of life defines our world. Our ability to create artifacts is like the reef building coral polyp; we construct homes which makes it possible for us to thrive in differing environments the same way that the calcite apartment blocks of the coral define their polyp world.

This symbiotic relationship between externalized information in the form of technology and internalized information in the form of thought created our symbolic language and gave rise to our gods, mysteries and science. Ideas, myths and scientific theories are shaping our minds and bodies everyday, domesticating populations and forming cultures. This world view is not separate from our technologies, ideas and viruses, it is dictated by them. The use of tools and the inseparable link between our minds and the things they create is a reciprocal process, all within the circle of willis, empires are built not with tools but by them.